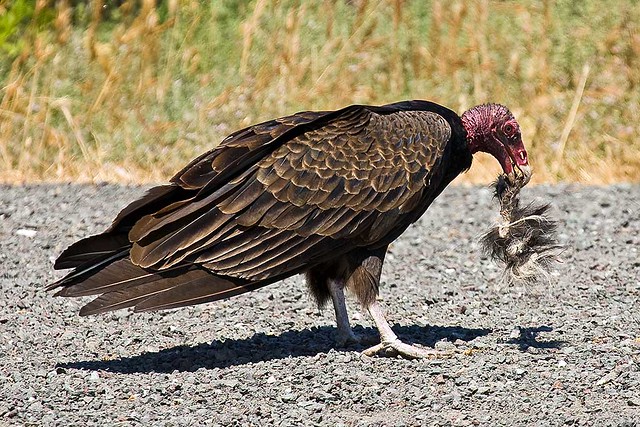 Like a whole lot of other old wives’ tales that seem to contain at least a modicum of truth, I’ve always believed that the only dead critter a buzzard wouldn’t eat is a skunk.

Now I know that’s not the case.

Part of the reason I clung to such a notion was observation. A dead skunk in the middle of the road seems to stay there a whole lot longer than a squirrel or possum or raccoon, all of which are devoured in no time. In one of the creepiest scenes I’ve ever witnessed—and, fittingly, it happened right around Halloween last year— two dozen buzzards lined up along the spine of my barn roof waiting their turn at a groundhog my dogs had killed the day before. In less than thirty minutes, nothing but its skeleton was left.

When Sophie killed a skunk a couple of weeks ago, I figured it would remain at the edge of the woods where George threw it for a long, long time. Not so. Early the next morning, a large kettle of buzzards (the term used when they’re flying together) was riding the thermals above the skunk’s final resting place.

Buzzards–and let me interrupt myself here to say that the correct term for the birds I’m writing about is “vulture,” but somehow it just doesn’t have the same punch—have an excellent sense of both sight and smell and can home in on a food source from more than a mile away. While buzzards occasionally kill a severely ill or injured animal, they vastly prefer meat that’s already dead. This is because their legs and feet are so weak and ill-formed that they can’t grasp prey that’s putting up a fight. And because buzzards also have weak beaks, they have an easier time picking apart flesh that’s already begun to decompose.

But they make up for these deficits in some amazing ways. Bare heads and necks allow buzzards to thrust their beaks deep into rotting carrion without worrying that bacteria and parasites might cling to their feathers. Buzzards’ stomach acid is significantly stronger than other animals’, so they can safely consume carcasses that are so decayed that nothing else would touch them. That’s why buzzards are so important to a healthy ecosystem.

And if blood and guts cling to the buzzards’ feet after a feeding frenzy? No problem. They simply urinate on themselves, which not only cools them off but kills harmful germs. Buzzards don’t fear predators, either. When threatened, they vomit. Not only does this horrify and disgust potential predators, it also reduces the buzzard’s body weight so that he can more easily fly away.

Talk about a brilliant design!

But back to whether buzzards eat skunks.  What I’ve learned from an exhaustive Internet search is that, given their druthers, buzzards prefer meat that’s soft enough to tear apart but not all-the-way rotten. Some buzzard observers claim that buzzards would rather eat herbivores (such as deer, horses, cattle and sheep) than carnivores or omnivores, though evidence is anecdotal.  All buzzard experts agree, however, that a wake (yep, that’s the proper term for a group feeding together) of desperately hungry buzzards will eat anything that’s dead. Including a skunk.

Though they have been known to leave behind the scent glands. Even a lowly buzzard has to have some standards.

7 thoughts on “What Buzzards Won’t Eat”